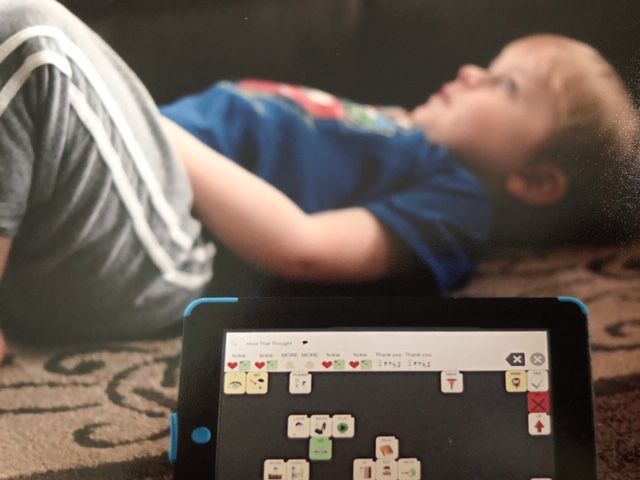 Years ago, when my son first received his autism diagnosis, I was lost on where to turn.

I knew my son needed therapy to help him in areas where he was struggling, and I knew I needed support on how to help him at home. A friend of mine referred us to CI Pediatric Therapy Centers  and I immediately set up an intake appointment.

It was recommended right away that my son jump start his therapy by participating in CI’s Boost program. The program would primarily focus on speech and occupational therapy to address my son’s needs/delays in those areas, with a minor emphasis on feeding therapy.

I will admit – I was hesitant in the beginning. To go from no therapy to an intensive therapy schedule seemed a little overwhelming to me. I was not sure how my son would adjust to those longer therapy chunks and the demands/expectations being put on him. I also had another younger son to think of, and had to figure out how I would entertain him for the three hours his brother was in therapy (we did not live local so going home was not an option).

Ultimately, I knew time was of the essence and I wanted to take advantage of our free afternoons before my son started kindergarten. I trusted the CI staff and the confidence they had in my son and how much he could gain from the Boost Program. Within a few weeks, we had our first therapy sessions!

Going in to the Boost program, my son was (and still is) nonverbal. We had tried teaching him some basic signs in his Early Intervention program, but due to his fine motor delays, he was never able to carry these out in an independent way.

Therefore, when we sat down with one of his lead speech therapists to make our goals for the Boost program, we had no consistent communication system for him. Over the course of the 60 minutes we spent in our initial speech evaluation at CI, the lead therapist had introduced my son to PECS (a picture exchange system for communication), and he was flipping through a binder of photos searching for the “swing” photo to hand her so he could be pushed more. I was AMAZED to see him progressing through a communication system with such ease in such a short amount of time.

Over the course of the Boost program, my son made incredible progress in his communication skills. He started with a small PECS binder and progressed to forming full sentences to request items he wanted. Within a week, my son was bringing me a sentence strip at home that said “I want juice please”. It made such a huge difference in our home life! About halfway through the program, the speech therapists at CI started trialing different AAC apps on the iPad with my son.

At the end of the program, they had made their recommendation for a robust AAC program that worked on an iPad and helped me set it up for him. To go from no communication, to hearing my son request “more tickles mommy” on his iPad within a matter of weeks was something I never could have imagined!

My son also received intensive occupational therapy during his time in the Boost program.  There were many skills he worked on over the weeks to help him with his fine motor coordination and strength. We looked at his puzzle skills, his ability to hold a writing utensil and trace lines, and his play skills with simple games. However, we also addressed some of his functional skills that really made a big impact on our home life.

His therapists helped address some of his delays with getting dressed, putting his shoes on, brushing his teeth, zipping his coat, etc. They also made recommendations for things that could help us at home (like adaptive socks, more appealing toothpaste, etc). These functional gains helped increase his independence at home and at school.

Finally, my son also received some feeding therapy services. This part of the program really helped m understand some of the sensory issues that came with eating for my son. The therapists helped me understand how important our eating environment at home was for my son’s success and they helped me select appropriate seating options for him. They explained to me the importance of allowing my son to explore his foods and all of the different sensory aspects that go in to that. When we finished with the Boost program, meal time became a much more relaxed and enjoyable time for our family.

My son adjusted to the longer chunks of therapy time much quicker than I anticipated and it soon became a normal part of our routine! I used the time to run errands, grocery shop, and to spend some one-on-one time with my younger son at the many different parks and attractions near CI. We also spent a lot of time playing in the CI waiting room, and the clinic quickly became like a second home to us! The staff were incredible and we got to know them very well! My younger son loved walking laps around the waiting room areas and waving to all of the employees!

After our time with the Boost program, we were able to transition to a less intensive schedule with CI. We were able to continue working with some of the therapists we had met in the program which meant there was no period of regression for my son. The home program that I received at the end of Boost was put together so well, and the therapists did a great job of going over everything with me and even providing video examples of different tasks and exercises. This gave me the confidence I needed to implement these practices into our home life. I was also able to share the program with our school staff in order to create consistency in all environments for my son.

Five years later, we are still at CI! While we have branched out to different therapists/clinics, we still run in to some of our original Boost therapists from time to time and they are always so excited to check in and comment on the progress my son has made! I am so happy we made the decision to invest our time and energy into the Boost program! It really jump-started my son’s progress and put him on a track for continued success!

Written By: Megan Hufton, a parent