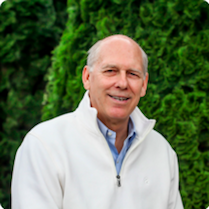 Jim has thoroughly enjoyed learning from the countless families and children he has encountered, as they have truly inspired his love, passion, and efforts over his 40-year career. Jim likes playing golf, bowling, and spending time doing water activities. Jim also enjoys a nice glass of wine.

Jim is a physical therapist who graduated from the UW-Madison Physical Therapy program in 1975 and received a Masters of Education and Administration from UW-Milwaukee in 1980. Jim has worked primarily in pediatrics with ages 0-21 years in settings including preschools, public schools, hospitals, and university affiliated pediatric outpatient centers in Wisconsin, Nebraska, and South Carolina. He has had extensive additional training in pediatric evaluation and intervention including neurodevelopmental treatment certification. Jim has taught in the physical therapy programs at the Universities of Nebraska, South Carolina, and Wisconsin-Madison. He has presented at national conferences including the American Academy of Cerebral Palsy and Developmental Medicine and the American Physical Therapy Association. Jim has published numerous journal articles and contributed to several book chapters.